Photos of one of the daughters of Pastor Chris and Anita Oyakhilome, who turned 21 a few weeks back – August 11, 2014 – have surfaced online. 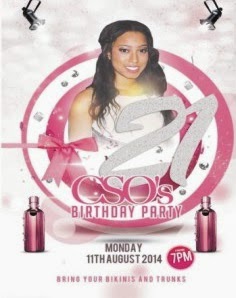 In marking the 21st birthday, Sharon Oyakhilome, who is also a gospel singer, with the stage name Carissa Sharon (CSO), held a bikini party in London with her friends in attendance.

Reacting to the photos, critics condemned the Christ Embassy Pastor’s daughter for having a bikini party.

“Sorry, but it is wrong at all levels for a Pastor’s child to have a bikini party. What is the aim of a bikini party? Can such a party glorify God? Please we have values in Africa and having a bikini party does not qualify you as one with good values”, a twitter handle Leks critiqued.

Another critique, Omoyeni posted “Equal to a semi nude party…. what exactly is the point of a bikini party? Sex appeal? Yeah they are human too but what is she driving at?”

Several others condemned Pastor Chris Oyakhilome for not properly upbringing his daughter according to the biblical messages he preaches.

A facebook user, Ayeni Adebisi, however, stated “She’s 21! She’s an adult! She can choose and decipher between wrong or right by all standards… that does not mean her parents have failed! It is her choice to make! I hate when people refer to pastors’ children like they are the pastors! They are normal children like everyone else… they throw tantrums…. get some things wrong like you too… it doesn’t mean our parents have failed or they are bad pastors!”

This is coming a few days after the messy divorce of the Christ Embassy Pastor leaked online.

Replies to This Book Discussion